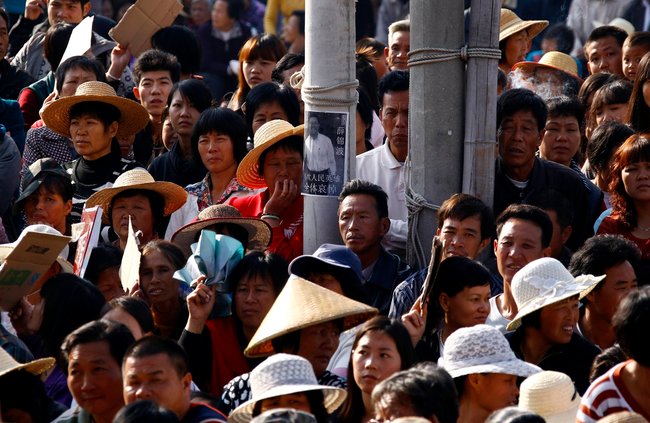 Residents of Wukan, China, at a village meeting on Dec. 21. The poster is of Xue Jinbo, who died in police custody after he was chosen to negotiate land deals with authorities. David Gray/Reuters

Link to Op-Ed in The New York Times

Two weeks ago peasants in Wukan, a fishing village in the prosperous southern Chinese province of Guangdong, took over their village, throwing out local leaders. Because of long unanswered grievances, they risked their lives, barricading roads into the village and facing down the police. Their central concern was the sale of collectively owned village land to property developers, which has impoverished most residents while enriching their leaders.

As the Wukan protests evolved into an international media event, a provincial party official, under pressure from Beijing, stepped in and swiftly negotiated a truce acceptable to the villagers. This week Prime Minister Wen Jiabao asserted that “China can no longer sacrifice farmers’ land rights for the sake of reducing the cost of urbanization and industrialization.”

Once again China’s leadership has succeeded in the complex task of managing social unrest. The eye of the world is now shifting away.

This is a serious mistake. Like China’s leadership, the world should continue to play close attention to Wukan and to the tens of thousands of incidents of rural unrest that occur each year in China, the vast majority resulting from land grabs. Why? Because what happens to China’s peasants is crucial to our collective future.

China’s rural population is at the bottom of the global commodity chains of both Chinese and transnational corporations. Unhindered by regulations, these companies utilize China’s land and rural labor for the environmentally and socially unsustainable production of goods consumed the world over. While consumers everywhere benefit from inexpensive products and corporate profits, the real costs are borne by China’s most vulnerable.

The Wukan incident reveals the shaky foundation of China’s rise to economic super power: it is built upon an unresolved land struggle with hundreds of millions of lives in the balance. Anything that negatively alters the quality of life of China’s rural majority has the potential to impact the already fragile global economy, sending ripples across the world.

As I have seen first-hand during nearly 30 years of research in rural China, land grabs have been central to China’s economic “miracle.” Local governments take over land for real estate development, industrial expansion, roads, dams and power plants.

Having government and party connections to get a hold of prime real estate in urban cores and suburban fringes has enabled massive fortunes in property development. Eight out of China’s top 10 billionaires made their fortunes through land grabs.

Similar land grabs have occurred in China’s rural hinterlands where there is little oversight by the central government. Of the 1.1 million hectares taken away in 2011, according to China’s State Council, 700,000 were transferred illegally. The result is the complete loss of land for approximately 75 million peasants, who join the over 200 million rural residents migrating around China daily in search of work.

Land loss leaves many rural families — still the majority of China’s population — without access to enough land to produce their food. Wukan’s villagers not only saw 400 hectares of shared land sold to a property developer, but their common fishing grounds were sold off as well to a large seafood company. This severely reduced many villagers’ basic subsistence. Their rising anger and desperation is seen in other rural areas nationwide.

Land grabs are part and parcel of growing social inequality in China. Despite increasingly strong populist rhetoric from the government, along with significant rural investment to counter rising discontent, China today rivals the most unequal countries in the world. The 400 million Chinese at the bottom face continual threats to their livelihoods through land loss.

Beijing’s success in quelling daily unrest around the country, mainly through the use of local officials as scapegoats, fails to address the fundamental problem: a development path built on an eroding foundation of unjust land grabs, environmental destruction, social polarization and the resulting vulnerability of the country’s poorest and most marginal people. Until these structural issues are addressed, the Wukan incident will only be a harbinger of things to come.

Joshua Muldavin is professor of human geography at Sarah Lawrence College.
A version of this op-ed appeared in print on December 31, 2011, in The International Herald Tribune.